This page uses Google Maps. The map will be loaded from Google-Server and some of your data may be used by Google. In order to see the maps, please click accept. You can also click here to see further information related to this.

We are a large family of celebrants accredited by the Government of Quebec. Civil wedding and personalized ceremony, in French, English or Spanish, and at the location of your choice! More than 22 years of experience at your service. Hope to meet you !

Centre Amour et Mariage of Québec has a team of 15 officiants dedicated to personalizing wedding ceremonies. The officiants are mandated by the government of Quebec for civil marriages. The team is able to perform ceremonies in French, English, and Spanish.

Rev. Dr. Louis Lafrance, director and officiant for the Centre Amour et Mariage of Quebec, has been officiating for 22 years and has received an impressive number of laudatory reviews over the years. He is also the assigned minister of the Ice Hotel and Chateau Frontenac hotel in the City of Québec. Mr. Lafrance and his team won the WeddingWire Couples’ Choice Awards for many consecutive years.

A complimentary initial meeting is provided to all couples. Special packages for weddings in the South are provided. The team performs the following types of weddings:

The team officiates weddings in Quebec and surrounding areas, including the City of Québec and Charlevoix, and has ministers in some other regions of Quebec, including Montréal. Baptisms, dedications, and welcoming ceremonies for children are also performed by Centre Amour et Mariageof Québec officiants. 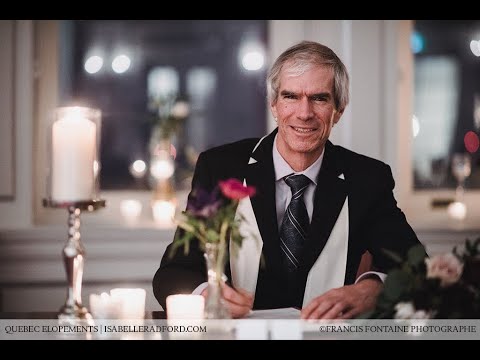 0.0 average based on 0 Reviews

There are no reviews at the moment In order to perform this action you have to login

Some of the listing features are available only for registered users.

In order to perform this action you have to login

Trust a woman who has established herself as the benchmark in marriage! Founded by Isabelle Thuot, Mariage Déco Belle Nuance has become, in just over a year, the largest independent site for wedding decoration products and accessories, first and then for all special occasions.

Since then, the entrepreneur has appeared on social media as well as everywhere on the web, allowing wedding providers to be showcased on her Internet platforms.

0
Shares
By continuing to browse this site, you accept the use of cookies for sharing content on social networks and producing statistics.
I accept Find out more.